HOME OF THE RED DEVILS 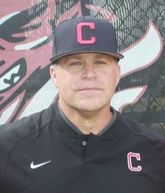 Coach Kehoe is beginning his fifth year as a coach of the Central High School Red Devils, third year as head coach.

Kehoe, a graduate of Hammond High school in Columbia, Maryland, received his Bachelor of Science Degree from Auburn University Montgomery, where he was a member of the 1992 National Association of Intercollegiate Athletics World Series team. He last played professional baseball for the Pine Bluff Locomotives (Pine Bluff, AR) of the Big South League. He received his Masters of Science in Curriculum Development from Arkansas State University in 2014.


Kehoe is married to the former Brooke Wells of Wetumpka, Alabama. They have three sons: Jay, Cole, & Cooper. 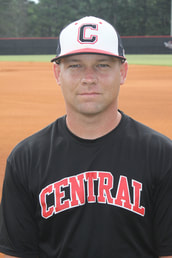 Coach Butler is beginning his sixth season as Assistant Coach of the Central High Red Devils.

Butler is an alumnus of Demopolis High School where he earned a baseball scholarship to play at Central Alabama Community College in Alexander City, Alabama. After completing his two years at CACC, he continued his baseball career at Shorter University in Rome, Georgia, graduating with a degree in Sports Management.

Butler spent two years coaching at Marengo Academy in Linden, Alabama. As an assistant in year one Butler was responsible for coaching hitting and outfield positions. The team was one of the top hitting teams in the state, hitting an impressive .375 as a team. Butler took over as head coach in year two, winning district coach of the year, an award voted on by the coaches in the surrounding area. He moved on to complete his Master’s in Business and Marketing Education from Auburn University and then served one year at Sweetwater High School as Head Junior Varsity coach, hitting coach, and infield coach before accepting a position at Central High School.

Coach Butler is also a Childhood Cancer Survivor, surviving a battle with Acute Myeloid Leukemia at the age of 15, a cause about which he is very passionate!

He is married to the former Katie Dubois of Coatopa, AL. They have two children: a son, Easton and a daughter Lily.
Johnnie Eaton, Assistant Coach

Coach Eaton is entering his first year as an assistant for the Central Red Devils Varsity Baseball team.

Prior to this season Eaton spent two years as an assistant coach at Mobile Christian School and Brewton-Parker College where he coached outfielders.  After finishing his high school career in Mobile, Alabama, Eaton began his playing career at LB Wallace community college, and later finished at Point University where he majored in Exercise Science. 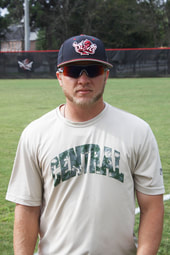 
Coach Skinner is beginning his seventh season as an Assistant Coach for the Central High School Red Devils.


Prior to his high school playing years, Skinner was the second baseman on the 1999 Little League World Series team that won the U.S. Championship. He also played second base and pitched for the 2001 Dixie Boys World Series champions.


Coach Skinner is a 2005 graduate of Glenwood School in Smiths, Alabama, where his team won an AISA State Championship in baseball his senior year. He pitched and played shortstop for the Glenwood Gators and was awarded the Golden Glove Award all four years of his high school career. Additionally, he lettered in football, wrestling, and basketball. He attended Auburn University, where he was the starting shortstop, after being red-shirted his freshman year. After suffering a season-ending injury, Coach Skinner transferred to Columbus State University in Columbus, Georgia for the 2009 season. He led the country in double plays while also batting .362 with 14 doubles his junior year. He was awarded the Southeastern Gold Glove Award his senior year. Coach Skinner graduated from CSU with a Bachelor's in Exercise Science. He will earn a Master's in Health and Physical Education from the University of West Alabama this year.

Coach Jones is entering his third year as an assistant coach and first year as Junior Varsity Head Coach for the Central Red Devils.

Jones graduate from Northside High School in Columbus, Georgia, where he earned a scholarship to play baseball at South Georgia State College in Douglas, Georgia. After two years, he continued his baseball career at Point University in West Point, Georgia. He finished with a degree in Psychology.

Jones spent his first year coaching at Point University in 2015-2016 season. As an assistant, he was the head recruiter and worked primarily with pitchers/catchers. The school finished nationally ranked 11th for the first time in school history. That year, Point finished with a Regional championship as well as its first NAIA World Series appearance. As a staff, they had four NAIA Scholar All-Americans and nine All-AAC Academic members. After that year, Coach Jones continued his education at the University of West Alabama for a Masters Degree in School Counseling.

He is married to Madison Jones of Columbus, Georgia.
Troy Jackson, Assistant Coach

Jackson graduated from Central High School in 2014 where he played third base and pitched as a three-year starter for the Varsity Red Devils. He was the team captain his senior year. He was also Salutatorian of his graduating class.

After high school, Coach Jackson attended Jacksonville State University in Jacksonville, Alabama and graduated with a Bachelor’s in Mathematics, Secondary Education in 2018. During his time at JSU he served as an assistant JV and Varsity baseball coach at Weaver High School in Weaver, Alabama. Coach Jackson returned to his roots to begin his teaching and coaching career at CHS and mentor the young adults of this school as he was as a student.